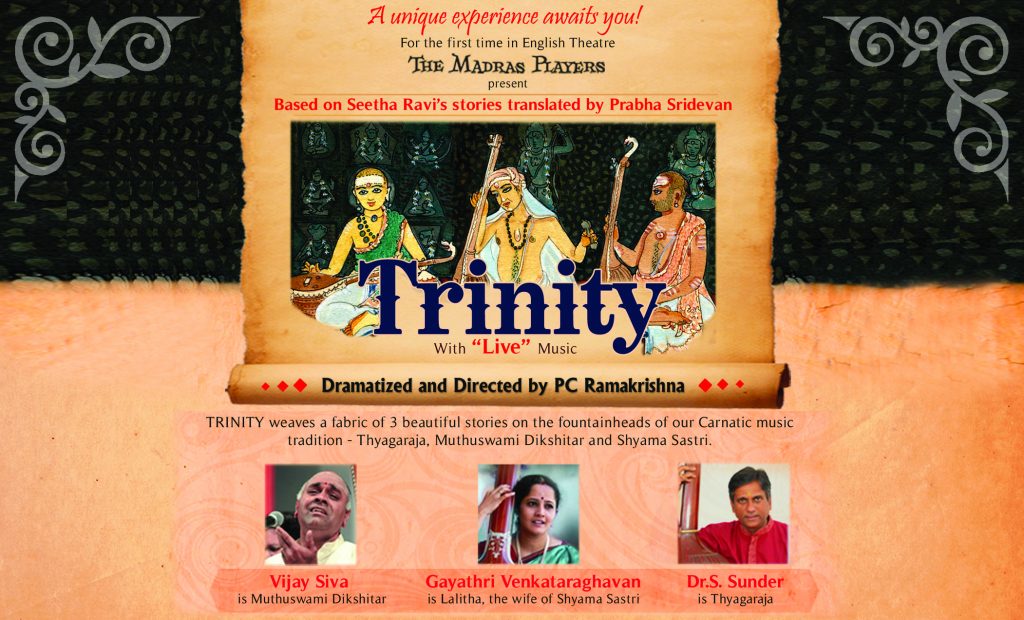 THE MADRAS PLAYERS…..and the journey to TRINITY

Founded in 1955, The Madras Players is the oldest English theatre Company in India. Having performed the works of playwrights from India and abroad, the group has about 300 productions to its credit. Madras Players have been among the pioneers in showcasing Indian writing on stage, in translation, adaptation or original. Starting with the plays of Badal Sircar, Mohan Rakesh, Vijay Tendulkar and Girish Karnad in the 70’s, we have gone on to celebrate the works of several prominent South based writers…Kalki Krishnamurthi, R.K. Narayan, Indira Parthasarathi, Sivasankari, Komal Swaminathan, R. Chudamani among others. It is in keeping with this spirit of new discovery that The Madras Players offer their latest production, ‘TRINITY’. It is based on the sensitive stories of Seetha Ravi (published in Kalki) on Carnatic music’s legendary composers, Saint Thyagaraja, Muthuswami Dikshitar and Shyama Sastri. Translated by Prabha Sridevan from the Tamil (in The Hindu), these stories are woven into one seamless fabric, dramatized and directed by P.C.Ramakrishna By a wonderful coincidence, not only were all three born the temple town of Tiruvarur in the mid-18th Century, but lived AT THE SAME TIME in and around Thanjavur, giving magnificent compositions to the world.

It is for the first ever time that “Live” Carnatic music is being amalgamated into an English theatre production in India, with prominent concert singers taking on the different roles. Vijay Siva, Gayathri Venkataraghavan and Dr. S Sunder lead the galaxy of singers and actors in the play. The characters themselves sing, making the entire presentation very different to what our audiences have seen. ‘TRINITY’ is ultimately a reverential tribute to the Tiruvarur-Three. It is also ‘The Madras Players’ way of celebrating our great culture and tradition, and the genius of these 3 legends that has filled the universe with musical gems of “the purest ray serene”

Muthuswami Dikshitar travels from one holy Kshetra to another with his disciples, composing memorable keerthanais on the temple, deity and legend of the place. The scene begins in Mayuram, where he has just composed “Mayuranatham Anisham ” in praise of theLord there. He then travels to Parimala Ranganathar temple in Indalur, where he composes 2 Krithis in Hamir Kalyani Raga, with the same pallavi butdifferent charanams. What makes him do it is the focusof the story.

Lalitha, wife of Shyama Sastri waits endlessly for her husband’s return home from the temple. In a conversation with her neighbor Dharmambal, the poignancy of her married life with Shyama Sastri is revealed along with her predicament. She ultimately merges with the “naadam” of his Tambura , singing the great Yadukula Kambhoji Swarajathi of her husband. Does he come home..? The story provides the answer.

Thyagaraja is preparing for the wedding of his daughter Seethamma, who plies him with a multitude of questions on whether he actually saw Sri Rama, and, if so, why he continues to yearn for Him in every song. Thyagaraja has answers for her, and the scene ends with a revelation of why he uses his Mudra “Thyagaraja” in his compositions.

Item added to your cart

Continue Shopping Go To The Cart